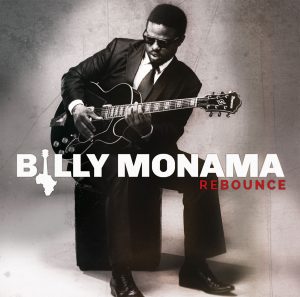 REBOUNCE, Billy Monama’s debut offering, plays like his auto-biography. It tells of various significant landmarks in his life. It is the very soundtrack that underscores the sentiments of places, people, experiences and influences that have shaped Monama’s Life and Music.
Monama strongly believes that in order to have a clearer perception of the Present, in our pursuit of the Future, it is imperative that we meaningfully reflect onto the Past.
We are constantly surrounded by mirrors whose depth reflectswhere we come from and where the roots of our identity lie. “Why then are we ignoring the sounds of the great Masters?” This is what he asks.
RE-BOUNCE attempts to contribute towards echoing the voices of the Masters and paying tribute to those whose ingredients have added flavour to Billy Monama’s developing Artistry.

On this offering, Monama reflects on Guitarists of influence that include Nicholas Ntuli, Vivian Ngubane, MarksMankwane, Patrick Ncube, Wes Montgomery, Tal Farlow, Allen Kwela, Jimmy Dludlu, Selaelo Selota, Pat Metheny,George Benson, Themba Mokoena, Pat Martino, as well as other creative Voices that include Sibongile Khumalo, Salif Keita, Themba Mkhize, Ella Fitzgerald, Hugh Masekela, Thelonious Monk, Charlie Parker and many others who contributed towards the early South African musical sound of Mbaqanga, Marabi & other Jazz idioms.
REBOUNCE is a collection of Monama’s original works that were composed over an extended period of trying times, whilst working hard to establishing himself in a new city and in a new Artistic space. Added to the mix is Monama’s fresh take on some South African folk songs that serve as a link between the Past, through the Present, into our Future.
Billy Monama’s wish is that you will Engage, Enjoy and find yourself in the music of
REBOUNCE.